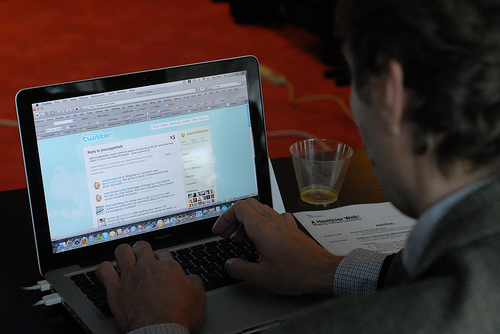 “You don’t really have many friends, do you?” my boyfriend asks.

“That’s not true, I have lots of friends!” I protest.

This was a common opinion fifteen years ago, when the general public was first becoming aware of the Internet. Back then, if you made friends online, you were considered very strange, or perhaps even antisocial. Even nowadays, a lot of people still believe that it is impossible to form any kind of lasting friendship with someone whom you’ve never met in person. Yet millions of people go online everyday to catch up with people across the world, people they may never get the chance to see in the flesh. Over time they get more familiar with each other, and form many of the same bonds as people who see each other on a regular basis. So is it fair to say that the people you associate with online don’t count as “real” friends?

There is an argument that in many ways, Internet friends have a chance to be closer than “normal” friends. There’s something about reducing a friendship to words that can help build very strong ties. There are no judgments on looks or personal quirks; there’s only the other person’s thoughts and ideas from which to form opinions. Far from being convoluted, it is actually a very pure and simple way to get to know someone from the inside out, and that can be a wonderful thing. For instance, I know a girl who meets her “real friends” every week for softball practice, but when I ask her questions about those people, it turns out she doesn’t know anything about who they really are. If you ask me how one of my Internet friends feels about a specific issue or current event, chances are we’ve talked about it before and I know the answer to that question. So which friendship is more real — seeing someone regularly and not really knowing them, or knowing someone without seeing them?

Some people still worry about the issue of trust online. After all, if all you have is someone’s words to go on, what stops them from lying? Well, nothing. But nothing stops your next-door neighbor from lying to you, either. Having people in close proximity does not automatically make them trustworthy. Some people can’t even trust their own spouses or families. If anything, I have found my online friends to be some of the kindest, most trustworthy people I’ve ever known. I even lent money to one of my online friends, knowing from context (after all, most of my other online friends knew her too, and could vouch) that she was good for it. She paid me back two days before she said she would. Never for one minute did I think or worry about it any more than I would have thought about a loan to a family member or friend up the road. Online friends are, after all, just people, and what does it matter if you meet those people on the Internet or on the street?

Today, the line between Internet friends and “real” friends is blurrier than ever. This is especially true for those who have moved away from their home towns. For example, I use social networking tools like Facebook to connect and keep in touch with people from back home whom I don’t get to see anymore. In essence, they have become Internet friends. Some of them I haven’t seen in so long that I feel I know more about them from the Internet than from our past time together.

Also, it’s becoming more common for a person’s Internet presence to coincide with their real life. It used to be that when you got online, you automatically made up a pen name and people everywhere got to know you through that. But these days people are starting to use their real names more and more, and they use their online presence as a way to enhance social networking that they fully intend to bring into the real world. People who use services like Twitter and MySpace often organize local meetings or even international conventions, where people who know each other from the web site can come to a central location and finally match a face to the name.

I think over time there has been and will continue to be an ever-changing shift in paradigm regarding the Internet and how it connects us. There is less of a difference now than there was ten years ago between in-person and online friends, and I think ten years from now the difference will be virtually negligible. The way we meet and learn about people is evolving, and it probably won’t be too much longer before “real” refers to anyone who is human rather than computer-generated! I, for one, cherish all of my friends, whether I meet up with them in a café or in a chat room. In this world where technology and the physical world cross over so frequently, the difference really doesn’t matter anymore.